As part of Northern Ireland Year of Food and Drink 2016 celebrations, Ian has been tasked by Tourism NI to work on three brand new locally-inspired dishes, one of which will be named as Northern Ireland’s New Signature Dish after a public vote. 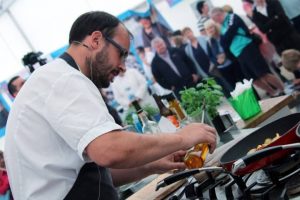 Ian said: “It’s an honour during Northern Ireland Year of Food and Drink to let my creative juices flow and join the ‘cooking collective’ to work with produce from Northern Ireland to create some delicious dishes.”

Ian is only being allowed to use Northern Ireland produce and the dishes must all be new but other than that there are no rules.

Susie Brown, Director of Corporate Development at Tourism NI, said: “We are very excited about the prospect of a new signature dish for Northern Ireland. Our firm favourites like stew and champ are so familiar to us all but we want to create a lasting food legacy as part of the Northern Ireland Year of Food and Drink 2016 to live on long after the year-long celebration is over and that is what the Signature Dish is all about.

“Once we have our three finalist dishes, we will ask the public to vote online for which dish they think should be named Northern Ireland’s New Signature Dish.  We all have an opinion on food and have strong feelings when it comes to what we like and what we don’t like so our chefs are really brave in taking on this tasty challenge. Finding one dish that really shines above the other two may prove difficult but our ‘cooking collective’ are leaving the final decision to the public.”

Keep an eye on our website as we’ll soon be revealing the final three dishes with details of their ingredients which will be open for public vote.  The winning dish will be announced in December.